A longtime fixture in Southern California’s jazz scene and always a delightful presence, Amber Weekes recently released her latest recording, Pure Imagination. She is heard at her best on this collection of standards and lesser-known gems which includes three Oscar Brown Jr. classics, two very different versions of “When October Goes,” and a vocal duet apiece with Sue Raney and Mon David.

Amber Weekes was born and raised in Los Angeles. Her grandparents owned Weekes’ Luncheonette in Harlem and among their regular customers were Duke Ellington, Billy Strayhorn, Ella Fitzgerald, Sarah Vaughan, Harry Belafonte and Diahann Carroll. “My parents are Harlemites and they were both singers. My father loved Frank Sinatra while my mother was more of a classical singer, so it is not surprising that I was born singing. In the house we heard everything: Frank Sinatra, Ray Charles, the Beatles, Barbra Streisand’s early recordings, classical music, Motown, Ella, Sarah and Billie. I have memories of standing on my parent’s coffee table and singing ‘Somewhere’ when I was three or four.”

Amber spent a period playing the viola but in high school she decided to concentrate on singing. She worked early on at such Southern California venues as the Rose Tattoo in West Hollywood, Café Melrose, the Atlas Bar & Grill, Maggiano’s, and the Twin Palms (in both their Pasadena and Newport Beach locations). She earned a Bachelor’s degree in English from Mount St. Mary’s College since the school did not offer jazz classes. However Amber studied singing extensively with such teachers as Gwendolyn Wyatt, Phil Moore, Jr., Catherine Hansen, and Sue Fink. Most significant has been her many years of important lessons with the great Sue Raney. “She encouraged my desire for storytelling inside of a song, allowing me to use my instrument in a way that I had always dreamed of. I am very lucky that I have had the opportunity to work with her so long. I think of Sue as an extended family member.”

Amber has performed in many venues in Southern California and also sung at the New Rochelle Jazz Festival in New York and Caesar’s Palace in Las Vegas. She made her recording debut in 2002 with ‘Round Midnight, a consistently rewarding set that ranges from Oscar Brown Jr.’s “Hazel’s Hips” and “More than You Know” to a medley of “Cristo Redentor and “I Want Jesus To Walk With Me.”

“Recently I was more than ready to record a new album. There were many songs that I was burning to record. I always look for a story that will capture my heart and my imagination. If a song does both, that is ideal.” Pure Imagination has Amber joined by many notable musicians including guitarists Mitchell Long and Ramon Stagnaro, Justo Almario on flute, altoist Keith Fiddmont, baritonist Dale Fielder, violinist-arranger Mark Cargill, Nick Mancini on vibes, bassist Trevor Ware, and drummer Charlie Ruggerio.

There are many highpoints to Pure Imagination. The title cut (Amber loves Lou Rawls’ version) features her interacting with Sue Raney. “I have such a high regard for Sue. She is not performing any more so it was important to me to record a duet with her, and it turned out quite fun.” Oscar Brown Jr. is well represented by “The Snake,” a duet version of the beautiful “Brown Baby” with bassist Trevor Ware, and a joyous “Mister Kicks.” The singer revives such swingers as “It’s All Right With Me,” “After You’ve Gone,” and “Gotta Be This Or That,” turns Paul Simon’s “Gone At Last” into New Orleans r&b, and fills “When He Makes Music” with inner heat. Two versions of the quietly emotional “When October Goes” have Amber interpreting the song as a ballad and a bossa. And “The Way He Makes Me Feel” is a duet with one of Los Angeles’ finest male jazz singers, Mon David. “The first time we sang together, there was an instant chemistry between us. But then again, Mon is so extraordinary a singer that he could have chemistry with a piece of cardboard! I’m really happy with how it came out.”

With the release of Pure Imagination, Amber Weekes eagerly looks forward to the future, particularly after the pandemic finally ends. “I’ve been working on a Christmas album and hope to have it completed soon. I would love to tour Europe and perform at more jazz festivals around the world. I also have a dream of performing with a trio or quartet in front of an orchestra. While I appreciate other genres of music, jazz is the water that I’ve always swum in and the air that I breathe. I was raised around jazz and it resonates the most with me so I plan to be singing it for a long time. Most of all, I hope that my singing is able to touch other people’s hearts.”

With her beautiful voice and very expressive style, there is no doubt that Amber Weekes will be touching many more listeners’ hearts in the future. 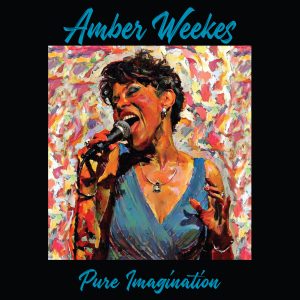 AMBER WEEKES/Pure Imagination: One of LA’s jazz vocal treasures serves up a great album for anyone that misses classic jazz vocal albums done right. Pulling Sue Raney out of mothballs and making Tony Newley work side by side with Oscar Brown, this well-conceived set does nothing but hit all the right notes throughout.